Social media has popularized countless trends, movements, and “challenges” over the years all with the end goal of garnering attention for a specific cause – remember the ice bucket challenge from 2014 that raised awareness for ALS? The ALS Association raised $115 million through this challenge, by the way, which proved that “going viral” pays. From high school football coaches to Oprah, everyone seemed to be pouring a bucket of ice water over their heads that summer.

The ALS Association was not the first to create these celebrity-endorsed crazes (in fact the ice bucket challenge wasn’t even started by the ALS Association), but it certainly stands out as one of the most memorable. And while these crazes direct a large audience’s attention to a worthy cause while raising a significant amount of money, they are finite. The real “challenge” becomes transitioning these charitable trends into sustainable donor habits. 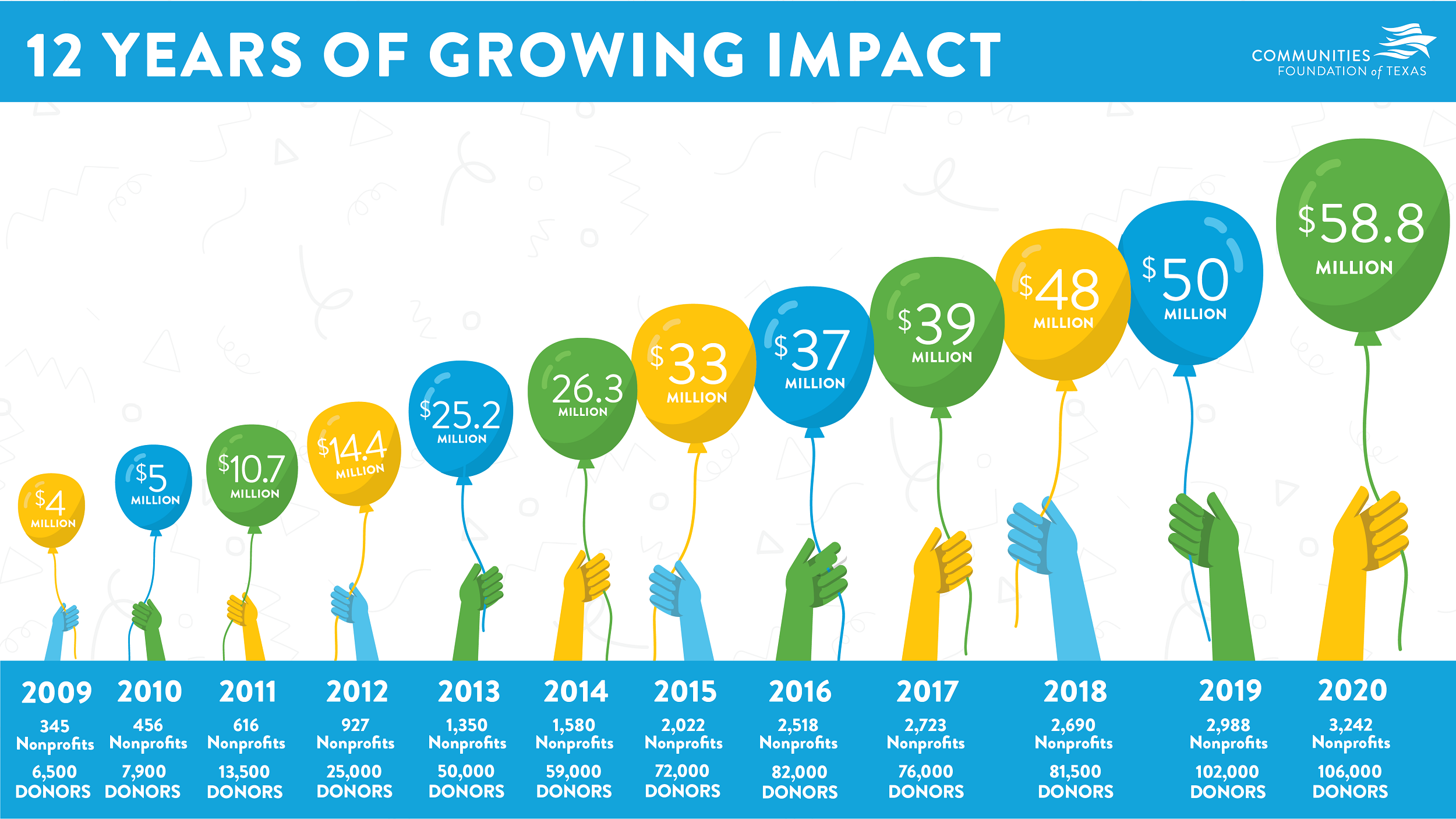 The event’s purpose witnessed growth alongside the financial success to become one that aspires to cultivate a spirit of community generosity, raise awareness of the critical work nonprofit organizations are doing in the community, the diversity in that work, and provide the financial and intangible resources to build capacity.

Arguably, this single community-wide initiative is a line-item in many nonprofit organizations’ fundraising budgets and a staple event for development staff. So what has made North Texas Giving Day more than a trend?

By definition, a habit is an acquired behavior pattern regularly followed until it has become almost involuntary. What’s key here is “pattern”. The best way to create a habit is through recurring patterns, which is why North Texas Giving Day is always the third Thursday in September. This recurring date allows both the non-profit and donor to plan accordingly. CFT furthered this ability to plan ahead (and prevent donors from forgetting the day-of) by allowing donors to schedule their donations beginning on September 1.

With more than 3,300 non-profits participating in 2021, there is sure to be a cause(s) for everyone to get excited about. There’s even a filter feature on the North Texas Giving Day website that allows prospective donors to sort organizations by cause, location and other parameters. This is a great way for prospective donors to learn more about causes facing the North Texas community and the variety of ways that organizations are solving them. Plus, new organizations are added each year, which means there’s always something “new and shiny” to capture a donor’s attention and heart.

CFT has undoubtedly conquered media support and celebrity endorsements for its day of giving, which not only means big impressions, but also lends legitimacy to the cause. Seeing Dallas Legend Dirk Nowitzki on the morning news towering over hordes of individuals in costume shaking brightly colored signs boasting their non-profit’s name and logo will certainly garner attention. This paired with radio PSAs, billboards, newspaper headlines, and an endless scroll of #NTxGivingDay on social media will leave the best of us with intense FOMO, or fear of missing out.

As beneficiaries of this community-wide day of giving, it behooves participating nonprofit organizations to promote North Texas Giving Day across all platforms – email, social media, postcards, phone calls and signage. As the proponent of North Texas Giving Day, rest assured that CFT is doing the same promotion among its constituency. Both are motivated by the prospect of raising funds, and the end result is donor cross-pollination. North Texas Giving Day serves as a single rally point that garners exposure to new donors that nonprofit organizations wouldn’t have otherwise. Even if a non-profit does no promotion or marketing itself, by simply appearing on the Giving Day platform, that non-profit is tapping into a new donor base.

Most importantly is the support of the community, who without, North Texas Giving Day would be just another “national day of [fill-in-the-blank]” or social media fad that fades as fast as it trends. As Texans we are endowed with the belief that we are special, and when it comes to charitable giving, as evidenced by the philanthropic outpouring in response to COVID-19 and Winter Storm Uri, Texans show up in a big way to support causes that they are passionate about. And this passion is contagious. Each year, the percent of new donors participating in North Texas Giving Day remains significant. According to CFT, 46 percent of donors in 2020 were brand new to Giving Day, and 58 percent of responding donors shared that the day inspired them to give more.

North Texas Giving Day, the largest community-wide giving day in the nation, is celebrating its 13th year on Thursday, September 23, 2021. The community day of giving is hosted by Communities Foundation of Texas, an organization that pairs donors to causes and organizations they are passionate about.

The Rees-Jones Foundation has participated in North Texas Giving Day since 2011 by contributing to the prize and bonus fund pool that is awarded to nonprofits who participate. The Foundation rallies around organizations like CFT that invest in local communities, amplify the impact of resources, and help the North Texas region thrive.