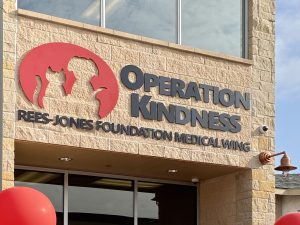 The new medical wing is part of OPK’s ongoing Build, Save, Love: Creating Hope for Homeless Pets capital campaign, which will enable Operation Kindness to provide even better medical care to 35 percent more dogs and cats with their 9,000 square foot facility located on four acres in Carrollton, Texas.

The Rees-Jones Foundation was the lead contributor to OPK’s $12M, four-phase capital campaign aimed at expanding their campus and improving operations. Phase-one includes the 9,200 square-foot, state-of-the-art medical wing that will house all medical operations. The focus of the new medical facility is to prevent the spread of illness and allow for more animals to be treated and rehabilitated. 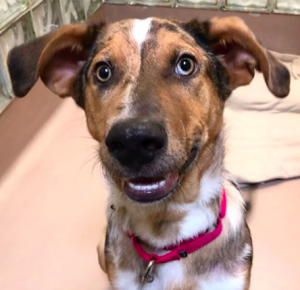 Adrian Cook, The Rees-Jones Foundation Director of Research & Evaluations spoke to the crowd of over 100 people stating, “As a Foundation, we are dedicated to the cause of ensuring that homeless animals fulfill their pet destinies by finding loving, responsible, forever homes. In Texas, nearly 114,000 animals are euthanized each year. We are committed to changing this for our city in partnership with Operation Kindness and the amazing work they do for thousands of adoptable pets.”

The new Rees-Jones Foundation Medical Wing was marked officially open after Foundation Representatives Adrian Cook and CJ Stevenson cut the ribbon alongside OPK Chief Executive Officer Bob Catalani and OPK Board President Jim Gibson. Attendees were then ushered in for tours of the beautiful facility that boasts high-quality medical equipment, treatment and surgery rooms, in-house lab, and multiple isolation and observation rooms each with their own porch for the animals to enjoy the fresh air as they recover. 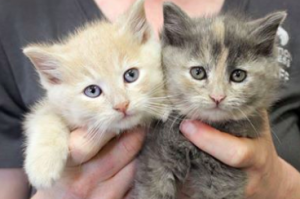 the medical wing, updated adoption space, expanded large dog area, community cat rooms and patios, and an expansive green space for the dogs to enjoy. The facility expansion will increase the daily capacity by 24 percent and increase adoptions as much as 35 percent.

The Rees-Jones Foundation is honored to continue the life-saving work of Operation Kindness.

The mission of Operation Kindness is to care for homeless cats and dogs in a no-kill environment until each is adopted into responsible homes and to advocate humane values and behavior. OPK is the largest and longest-serving no-kill animal shelter for homeless and abandoned dogs and cats in North Texas. On their four-acre campus in Carrollton, they facilitate nearly 5,000 adoptions annually, provide medical care and operate surrender prevention and humane education programs. Their vision is a world where all dogs and cats have loving, responsible, forever homes. 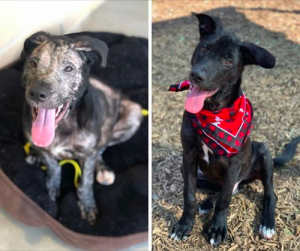 Roger came to OPK with a severe case of mange. He had almost no fur left, and his skin was so itchy that he would scratch until he bled. Luckily, Roger was one of the first puppies to receive treatment in the new animal hospital. Roger is available for adoption! (Photo Credit: OPK Facebook).

According to the Texas Alliance for Homeless Pets, three to four million animals are euthanized in shelters nationwide each year. Of the 150,00 dogs and cats entering shelters each week, many will be euthanized because the shelter is unable to provide the medical and rehabilitative care needed. OPK was founded as an alternative to shelters that euthanize unwanted and stray animals.

Other Animal Welfare Organizations Supported by the Rees-Jones Foundation in 2019:

Learn more about the nonprofit organizations that the Rees-Jones Foundation supports by visiting www.rees-jonesfoundation.org/our-grants

Volunteers, community supporters and government officials were in attendance.

OPK relies on one full-time vet, and several part-time vets to care for the animals.