Just in time for Memorial Day, PBS premiered an hour-long documentary called The Greatest Bond that showcases the impact of service dogs on the lives of veterans.

In the U.S., 22 veterans take their own life each day. Organizations like Patriot Paws have made it their mission to help our nation’s heroes who are struggling with post traumatic stress, anxiety and night terrors by training and matching veterans with service dogs free of charge.

“The sad thing about post-traumatic stress is that veterans tend to isolate and withdraw completely away from society at a time when they really need that feeling of family,” said Patriot Paws Veteran Coordinator and Retired Army Veteran Jay Springstead. “And hopefully that’s one of the things we can provide.”

But veterans aren’t the only population served by these dogs. Through their partnership with the Texas Department of Criminal Justice, the Patriot Paws service dogs are trained by inmates in the Christina Melton Crain Unit at the Gatesville Correctional Facility in Gatesville, Texas.

“The Patriot Paws program is positive,” said Warden Judy Scott of the Gatesville Correctional Facility. “Any type of program that will benefit the offenders, it benefits us in the long run because they’re coming back out to the community that I live in. And we’re making a difference.”

“We come in here and we’re broken. This program is helping us fix ourselves,” said Kathy, an inmate active in the program. “I took from the community for so long. I guess now I feel like I’m giving back.”

The Greatest Bond shares the stories of four veterans selected to receive service dogs trained by female inmates at the Gatesville Correctional Facility.

“I think that the veterans have fought for our freedom and I wanna make this my life. So that I can give back for everything they’ve done for us,” said Carmela, an inmate at Gatesville. “I think freedom is something people take for granted. I gave up my freedom when I committed my crime.”

The Rees-Jones Foundation believes that the connection between service dogs and their human companions is life-changing. For those facing physical limitations or emotional challenges, a service dog gives these individuals their life back.

“The true nature of dogs – their trust, loyalty and unconditional love for us – combined with the opportunity to serve and comfort creates such a special bond,” said Jan Rees-Jones, who founded The Rees-Jones Foundation with her husband Trevor in 2006. “They want to be with you no matter what, by your side. Like Daniel says in the documentary, there will be dark days still, but Kyle, his service dog, is going to be right there with him.”

According to Patriot Paws, it costs approximately $35,000 to train one service dog and takes roughly two and a half years of training before a dog is ready to be matched with a veteran. Patriot Paws has placed hundreds of service dogs with veterans from across the nation and yet the waiting list continues to grow.

With 11-20 percent of veterans who served in Operations Iraqi Freedom and Enduring Freedom diagnosed with PTS, the demand for alternative therapies and services, such as service dogs, can be expected to continue to rise.

The stories shared by the veterans in The Greatest Bond emphasize why The Foundation is dedicated to the healing of those with challenges through the life-saving companionship provided by a service dog. 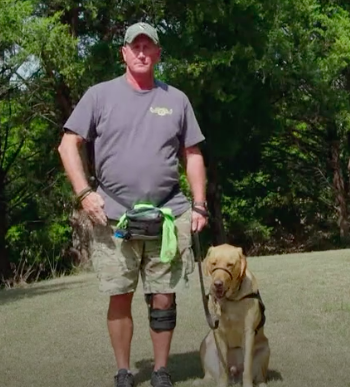 After years in the military, Frank suffered from depression, post-traumatic stress and anxiety. Due to his hyper vigilance, Frank spent most of his time in his basement. Frank said that’s where he felt safe.

Frank often felt lonely, which led to suicidal thoughts. “I’m going to be honest with you,” Frank said, “There’s some days that I wanna put my uniform on, go out to that garage and end it.”

But after several years on the wait list, Frank was notified that there was a dog in his future. He was thrilled. “I hope that when I get my dog it helps with my depression, and PTS, and anxiety,” said Frank. “And my loneliness when my kids aren’t here.”

Frank flew down to Dallas and was matched with Ross the dog.

“She’s counting on me like I’m counting on her,” said Frank. “It’s well worth the wait. She’s my life. She’s saved my life.”

After 15 years in the military, David was combating suicidal thoughts. The post-traumatic stress and anxiety he suffered from left David afraid to approach people or engage in conversation.

“There was a point last summer where for four days I sat on the couch with a gun,” said David. “And after about six days I couldn’t take it anymore. So I got on my motorcycle. Man if I could just ride down the road and get hit by a car, maybe I could die like that. I’m driving down the street and I see the building for Patriot Paws. 15 years in the service and I’d never heard of Patriot Paws.”

“When I first met David there was just something about him. He was a little bit on edge. And he came in and said, ‘I wanna volunteer today. What can I do?’ And he was kinda jittery, nervous. I just knew that I couldn’t let him leave. The statistics of 22 veterans a day committing suicide – I could tell he was in a dark place. And the look in his eyes was just hollow almost. I knew he needed help. And I knew that if he left here, it would not be good.” 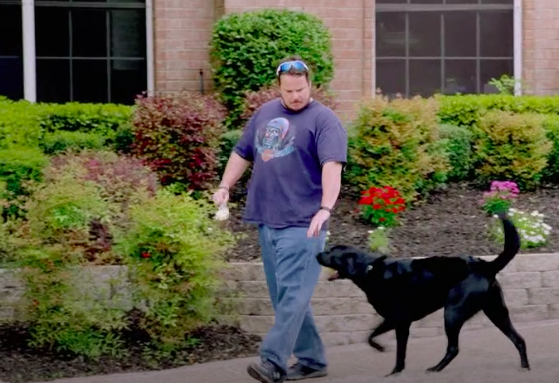 That day David assembled dog kennels, cut up dog treats for the trainers, and spent time with the puppies in training. “So I’m putting these crates together and for the first time, suicide wasn’t on my mind,” said David.

Jan was relieved to witness the change in David. “Just the simple presence of the dog and being able to pet him and focus on the dog allowed David those few hours of relief,” she said.

David continued volunteering with Patriot Paws. He bonded with Fossil, a black lab that was struggling in the service dog program and who needed extra training before he was ready to be matched with a veteran. 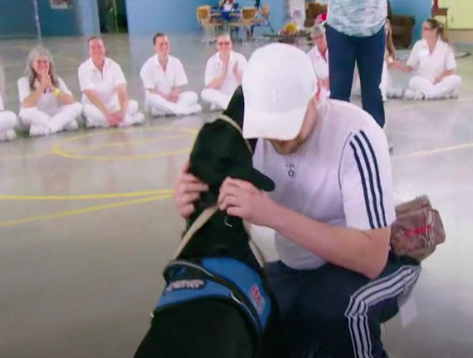 The moment Daniel learned that he matched with his service dog Kyle (Photo Credit: The Greatest Bond).

Daniel sustained trauma during his deployment leaving him unable to use the left side of his body. Because of this limitation, Daniel was worried about finding a service dog that could work with him as most dogs are trained to work on the left side of their human companion.

Patriot Paws initially introduced Daniel to a dog named Alex – the only service dog trained to work on both sides. But they didn’t click.

“So they went and got Kyle – a dog who can’t walk on the right side, hasn’t been trained to. They’re trained to respond to both side but they’re not trained to stay on the right side,” Daniel recounts. “I said ‘side’ and he was right up next to me. Alex wouldn’t do that. Kyle was on me like glue. I didn’t even have to think about the routine we were going through or the commands – he was right there. He was working with me. We had eye contact. It was like we’ve been working together for weeks.”

Kyle the dog picked Daniel the veteran. Daniel was ecstatic when Patriot Paws approved the match. “There will be days that I’m physically not feeling well and I’m sure I’ll face depression, but he’s gonna have his dark chocolate eyes and he’s gonna do a ‘see me’ right to my leg and he’s gonna be right there with me,” said Daniel. 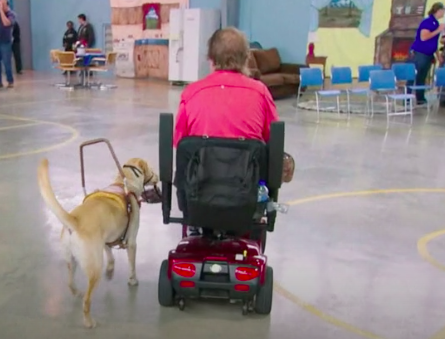 An accident sustained while deployed left Michael partially paralyzed. After years on the wait list, Michael was informed that it was finally his turn. But he wouldn’t let himself be excited. Michael said that things usually didn’t work out for him.

But then he met Sparky. “I take enough medication to literally kill a horse every day. I’m constantly dropping things,” said Michael. “But I say ‘get it’ then click and he picks it up for me. And I’m like, ‘thanks’. It’s so cool.”

Michael and Sparky clicked. Sparky could pick up Michael’s cane and hand it back to him. Michael could get out of his wheelchair and walk with Sparky by his side.

“It was an honor to work with Sparky and Michael,” said Tammy, the inmate who helped train Sparky. “Sparky was on Michael instantly. He would jump up on him and he was like ‘what can I get for you?’ It was insane – the connection right off the bat.”

Sparky was the perfect match for Michael.

“I feel like I’m pretty low on the totem pole – there’s guys out there missing arms and legs. I guess that’s why I just felt surreal,” Michael said. “Sparky is just electric. In my face. And that’s great – I’m kinda that way anyway.”

“For me to be able to give back, to become a best friend to a veteran, to save a life to a veteran, it’s given me a purpose in my life and it’s a wonderful experience.” -Inmate