The Foundation’s Dedication to Children in Foster Care

The Foundation’s Dedication to Children in Foster Care

“Take no part in the unfruitful works of darkness, but instead expose them.” -Ephesians 5:11

For over 100 years, community providers in Texas have served children and families involved with the child welfare system. According to the Texas Department of Family and Protective Services, in the last 20 years, foster family care has shifted from a service primarily managed by DFPS to one where approximately 90 percent is “purchased”, i.e. provided, through the private sector1. However, the state has maintained responsibility for each child’s legal case management while the child remains in the state’s conservatorship. Due to the evolution of the child welfare system, DFPS began evaluating how the system could be formally adapted to better leverage Child Protective Services and the private sector. 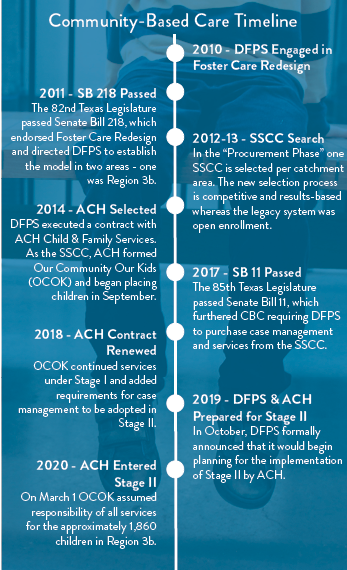 Beginning in 2010, the State of Texas in conjunction with Texas DFPS began the Foster Care Redesign effort. Community-Based Care was deemed the optimal solution for children and families in foster care. 10 years later, on March 1, 2020, the seven counties around Fort Worth that encompass Region 3b2 entered the second stage of CBC implementation.

Protecting and defending the welfare of children and youth who have experienced abuse and neglect has long been a priority of the Foundation. When the Foundation learned that Community-Based Care would be implemented locally by an existing nonprofit partner, ACH Child and Family Services, the Foundation knew it wanted to help ACH with the infrastructure to ensure the program’s success.

“I think the opportunity to support ACH’s work innovating foster care was an obvious one from the beginning,” said Chris Munson, senior program officer at the Foundation. “This was a chance for the Foundation to invest in ACH’s ability to build a more localized and responsive foster care system for children in our region. It has been exciting to see ACH build a proof-of-concept that will be replicated throughout Texas.”

As the Single Source Continuum Contractor3 for the catchment area4 of Region 3b, ACH formed Our Community Our Kids, its entity that would facilitate Community-Based Care.

“The model of Community-Based Care gives the SSCC the ability to identify what kids need and the flexibility to get services to the kids.”  -Wayne Carson

During Stage I of CBC deployment, which began in 2014, Our Community Our Kids became responsible for securing foster care placements for new children coming into care as well as managing the existing placements of children already in care. OCOK started by recruiting into its network of care 40 existing foster care agencies that were working independently. By building a network of care, OCOK was able to develop the first placement agency and service provider database with real-time information about services available, open placements, and child profiles.

By aggregating data in one place, OCOK began building a more comprehensive and complete system of care for the children in foster care.

Based on its data, OCOK identified a major gap in its network of care – there was a shortage of local facilities and families that could adequately care for kids with high needs, such as behavior problems. In the legacy system, a child with high needs was placed with whichever facility responded first to CPS’s request, which meant that children from Fort Worth were placed at facilities in Houston or Austin.

“We were able to assure the residential treatment programs that we could fill additional beds, and with our database, we were able to give exact profiles of the kids and their needs,” said Carson. “We were also able to develop training programs where we teach families how to work with high-needs kids so that treatment can take place in the foster home.”

As a result, OCOK was able to add 40 high-needs placements in Tarrant County, which meant an additional 40 children and youth in care could receive the high level of care that they need while remaining close to home.

OCOK entered Stage II of Community-Based Care in early 2020. This next step increased OCOK’s responsibilities by adding case management to the Stage I responsibilities of securing placements and providing services.

OCOK felt that by combining both pieces, case management and placement and services, it would be better positioned to serve the children in care. This was OCOK’s opportunity to address permanency, which Carson describes as “the ultimate goal”.

Upon entering Stage II in March of 2020, OCOK began to tackle an issue that plagued CPS for decades – caseloads. In the legacy system, caseloads in Texas were deemed two to three times higher than nationally accepted standards. Motivated to improve the system for both caseworkers and children in care, OCOK began working to reduce caseloads to one caseworker per 14 children, and one supervisor per six caseworkers. 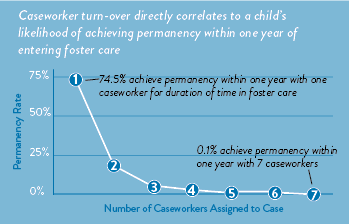 This update to caseload standards also endeavors to lower the caseworker turn-over rate. According to DFPS exit surveys, 26 percent of caseworkers reported poor working conditions, i.e. high caseloads, as their reason for leaving.

The Future of Community-Based Care

OCOK’s opportunities to further innovate the foster care system hit an all-time high when COVID-19 struck in March of 2020. A few months into the pandemic, Carson reports that all departments continue to step up to fill gaps in services, and he feels that his team has become more creative and resourceful in their work.

“My recruitment staff have seen the pandemic create a feeling of ‘wanting to help’. Many foster family applicants have made the decision to help because of the pandemic,” Carson says. “Our foster parents have shared that they are spending more time getting to know their foster children instead of hurrying from one thing to the next. They find they are more focused on relationships – not the hustle and bustle of daily routines.”

Regarding the future of Community-Based Care in Texas, Carson points to the success of other regions. “The success is beyond OCOK – it’s not just us,” Carson said. “The model is powerful.”

Region 2 is operating in Stage II alongside OCOK. The two catchments areas of Regions 1 and 8a are in Stage I of Community-Based Care, both of which are scheduled to transition to Stage II in 2020. DFPS is currently accepting applications through December 2020 for the SSCC in Region 8b. 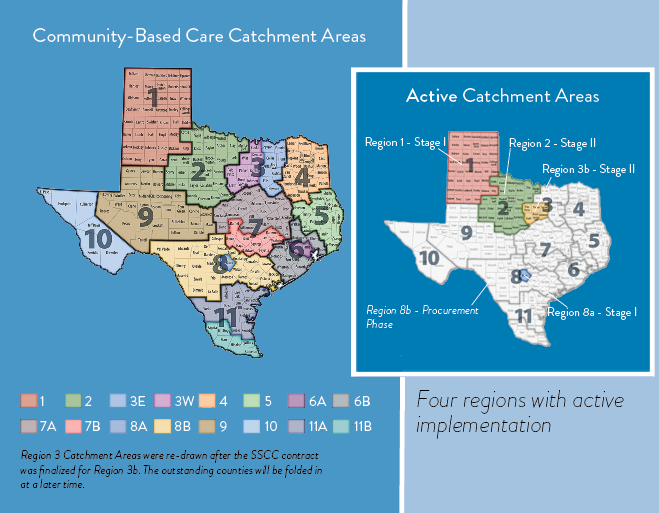 In 2019 The Rees-Jones Foundation established several three-year funding priorities for the child welfare system, which include proactively seeking out opportunities to support Community-Based Care, and increasing access to integrated healthcare for foster youth. Further, the Foundation challenged itself to reduce the deficit of high-needs placements for youth in substitute care. As such, the Foundation is proud to support ACH’s initiatives that address these areas.

1 Purchased services are services provided by local organizations/businesses and other outside entities through a contract with DFPS.

3 Single Source Continuum Contractor (SSCC) is responsible for finding foster homes or other living arrangements for children in state care and providing them a full continuum of services.

4 Catchment areas are the regions Texas is broken into for the phased implementation of CBC.

This article originally appeared in The Rees-Jones Foundation 2019 Summary of Grants.

Category: Original ContentSummary of Grants
other posts you may like
see all